The goal of the Good Knight Champion Award Program is designed to coordinate and connect 144,000 Acts of Kindness by America’s Champions. The awards use Quantum Physics to spread the energy of Positive Reasoning in order to counterbalance the current impact of years of Negative Reasoning.

The Good Knight Network Inc. (GKCEN), a 501c3 public safety organization, is seeking nominations for youth and adults who have made a commitment to protect and help heal others - those who are selfless champions with open minds and kind hearts, who want to serve the greater good and the Children of Tomorrow.

Are you one of those champions, or do you know a someone who should be recognized for an Act of Kindness Award?

As the energy of selfishness and negativity is spreading through the human collective consciousness of the United States, Michaela Victoria West, a Good Knight volunteer, is using her knowledge of Quantum Physics along with the Law of Attraction, and the healing powers of Reiki to counterbalance the energy. Her project is "144,000 Acts of Kindness" which distributes gold/silver coins and nuggets from the Good Knight Angelic Kingdom in Beltsville, Maryland, headquarters GKCEN.

GKCEN is co-sponsoring Princess Michaela’s Quantum Field “Universal Consciousness” experiment. As a gifted Reiki healer and budding Astrophysicist, she seeks to place 144,000 hand made Good Knight Champion award coins, crystal ankh grids, and standing stones in the hands of as many good-hearted community champions by Christmas 2022. The experiment is to monitor the effect that 144,000 individuals using  “Positive Reasoning” will have upon the Collective Consciousness.

Albert Einstein said, "Everything is energy. Match the frequency of the reality you want to create, and it will manifest. That’s not Philosophy, it's Quantum Physics.”

If you know how to get the attention of the universe it will respond. This system puts the person on the direct angelic highway to Universal Consciousness of Creation.

If you are interested in nominating a friend, family member or self-nominate, you can start by answering the four questions below.

1.) Who do you want to nominate? Give full name, age and the state where they live.

2.) Why are you nominating this person, or yourself, to participate in this ground breaking experiment?

3.) What would you like to have happen in your life that would make living in this world better?

4.) Does the nominee believe in working with “Angelic Energy” to advance human evolution? 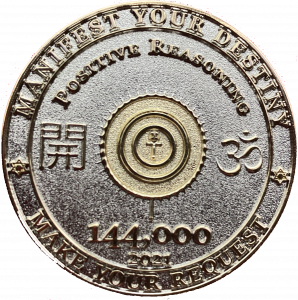 The “Coin of Destiny” that Princess Michaela-Victoria created is a priceless Quantum device powered by a subatomic blend of silver and gold. When used in concert with the Ankh/crystal grid, laser, or sunlight particles and human intention/emotion, positive intentions manifest. The coins are numbered, making them the ultimate collectible. Furthermore, since they cannot be purchased, they must be earned by setting in motion a golden Act of Kindness intended to inspire a miracle in the life of another person.

Choose from the six Award/Mission package levels you wish be sent for your nominations. You can use PayPal to submit you donation. If you have any questions, please contact us.

Level one -$50- Good Knight Champion -Award kit. The kit contains one “Coin of Destiny” and one -3” Ankh crystal grid for the nominee and one “Act of Kindness” Mission packet containing one 1” Ankh crystal grid bracelet and four gold Miracle Nuggets w/instruction card. After gifting the mission packet to a friend, or leaving it for someone to find, the Act of Kindness is complete and the Coin of Destiny has been earned. You can activate the coin by writing a reasonable request on a card while in the presence of the coin. Touch the Ankh to your forehead to transfer your thought energy to the crystal grid, then place the Ankh on the card near a window where sunlight particles will directly hit them. Carry the coin with you as a link to your request and the request of the person who received the mission packet. Even if the mission packet is never found, your request will begin to manifest within 30 days.

Level two -$75- Angel Knight Champion -Award Kit. The kit contains one “Coin of Destiny” and one “Intention” Stone that radiates one of twenty-two emotions, the fuel the energy of positive reasoning. If you choose this level all you need to do is write your request on a card then set it and the stone it sunlight. Not only will the goldstone send your request loop but the intention/emotion will also be released. This kit has Act of Kindness Mission packet containing one 1” Ankh crystal grid bracelet and four gold Miracle Nuggets with an instruction card. Even if the mission packet is never found, your request will begin to manifest within 30 days.

Level three - $100- Battalion Commander Award Kit. This kit contains one “Coin of Destiny” and one 6” Super Ankh crystal grid. The instructions are the same as in level one, but when your requests are placed in sunlight with this kit, a full 1,000 angels will be taking you issues on. This kit contains one-Act of Kindness Mission packet with one-2” Ankh crystal grid necklace and four-gold Miracle Nuggets with an instruction card. Even if the mission packet is never found, your request will begin to manifest within 30 days.

Level four -$125 - The Hierophant’s Ankh in Stone-Award Kit. This kit contains one “Coin of Destiny” and one Master’s monolith with a 1” Ankh crystal grid carved into its center. This level combines the energy flowing from the “Key of Life” but also infuses the energy of all twenty-two intention/emotions when activated, along with any personal request you might have. This kit includes one-Act of Kindness Mission packet containing one 2” Ankh crystal grid necklace and four gold Miracle Nuggets with an instruction card. Even if the mission packet is never found, your request will begin to manifest within 30 days.

Level five -$150- Einstein’s Stonehenge -Award Kit. This kit contains one-“Coin of Destiny “ and one sculpture an ancient “Stonehenge” arrangement, powered by a Sunstone hovering over seven standing gold monoliths. This is the easiest device to operate. Just write you request on a card, put the card under Einstein’s lamp and press the hidden button. You only need to leave it lit for about five minutes, or simply sit the device near a window where direct sunlight can ricochet off the goldstones. The kit comes with two rare Jupiter goldstones sealed in resin in the  shape of four dinosaurs -T-Rex, stegosaurus, Brontosaurus or Triceratops. Keep them with the lamp for extra flash or give them to children for luck and positive guidance as an Act of Kindness. This kit also contains one -Act of Kindness Mission packet with one 3” Ankh crystal grid necklace and four gold Miracle Nuggets with an instruction card. Even if the mission packet is never found, your request will begin to manifest within 30 days.

Level six - $200 - The Greatest American Champion -Master Ankh/Award Kit. This is the ultimate award to give/receive, if you want make a powerful impact. The set comes with two-“Destiny” coins and one-8” Ankh crystal grid rising out of a mound of 144 Miracle gold nuggets. It also comes with a set of four dinosaur “Jupiter”goldstones and a laser wand with photon torch tip. The Mission packet contains one-3” Ankh crystal grid necklace and four Miracle nuggets. With a mission complete, activate your request by writing the request on a card and placing it under the lit Ankh. With Photon Torch lit watch the subatomic light particles gathering on the tip of the wand. These are smart electrons waiting to interact with your brain waves. Touch the tip of the torch to your forehead transferring the thought energy request to the Great Ankh, then remove the tip, step back 10’ and hit the golden surface with a steady stream of emerald green light. A “Big Bang” of silent energy will fill the room as 144,000 Angels of the Light begin working on your behalf.

This healing/art Great Ankh lamp is the Key to unlock the powers the Universe and it represents the Washington Monument obelisk in the nation’s capital. After the darkness and negativity fell over the monument grounds during the January attack on the U.S. Capitol, Princess Michaela organized a cleaning of the negativity by seeding the monument and the ground around it with 144 golden Jupiter Stones. She has now claimed the obelisk as the center of the Angel-Knight global Crystal Grid of Positive Reasoning. In honor of Albert Einstein's memory she also seeded Einstein's park and statue a few blocks away at the National Academy of Science. We now visualize the monument as a great golden transmitting “Positive Reasoning” energy and “White Light” out to all locations where Ankh and gold nuggets have been placed. Over 19,500  Acts of Kindness mission packets have been placed so far. The goal is to place 144,000 by the end of 2022. Will you join in the effort?

This website uses cookies to improve your experience while you navigate through the website. Out of these, the cookies that are categorized as necessary are stored on your browser as they are essential for the working of basic functionalities of the website. We also use third-party cookies that help us analyze and understand how you use this website. These cookies will be stored in your browser only with your consent. You also have the option to opt-out of these cookies. But opting out of some of these cookies may affect your browsing experience.
Necessary Always Enabled

Any cookies that may not be particularly necessary for the website to function and is used specifically to collect user personal data via analytics, ads, other embedded contents are termed as non-necessary cookies. It is mandatory to procure user consent prior to running these cookies on your website.